All the ABS/BMZ/DAHW project Dzongkhags (Chukha, Dagana, Punakha, Sarpang, Trashigang) and Thimphu observed World Cerebral Palsy by engaging in various activities and sensitizing the public. Every individual had a touch of green to symbolize their support to people with cerebral palsy. 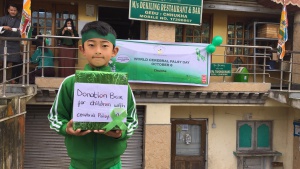 CBID team, Chukha observed the day at Gedu town (0 point) sensitizing passersby and tying a ribbon around the wrist. Simultaneously the team raised a donation for Tandin Tshering, 12 years old boy with cerebral palsy whose parents are financially weak to meet the daily expenses of their family. With the amount raised, the Coordinator Ms. Tshering Zangmo and Two Assistant Coordinators Ms. Pema Yangki and Ms. Karma Om , Chukha bought a rice cooker and diapers for Tandin and the remaining balance was given to the parents to spend for the living expenses. ABS would like to extend gratitude to all the donors who made a difference in Tandin’s life. Furthermore, the day was also observed at the Gedu Hospital whereby the team engaged the patients by showing them motivational videos about disabilities as well as engaging the attendants in activities to sensitize about cerebral palsy. Lunch and refreshments were served to the staffs and patients at the hospital. 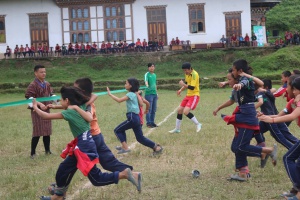 CBID team Dagana observed the day at Gesarling Central School coinciding with their football open tournament. Before the match began, the team sensitized about cerebral palsy to the players and the audiences then tied ribbons around the arms marking their support for people with cerebral palsy. They also engaged the Gasarling students in a three-legged race, experiencing the difficulties people with cerebral palsy face. Prizes were given to the winners and all the particiaonts had a fruitful day. 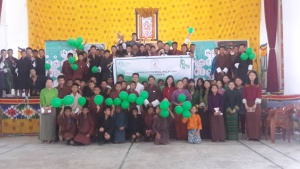 CBID team Sarpang observed the day at Sarpang Central School. Presentation about cerebral palsy and community roles were presented by Dr. Tashi Dorji from Sarpang Hospital to the teachers and students followed by activities such as buttoning the coat, writing with left hand, hand free biscuit eating competition. It was an energizing involvement and all the participants were entertained as well as sensitized about the difficulties people with cerebral palsy face. 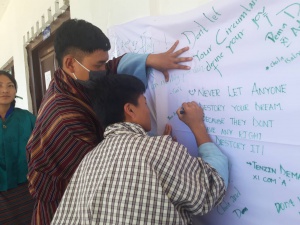 CBID team Trashigang observed at Kelki High School, Yonphu along with ‘The Blurred “Normals”‘, a young group of ambassadors from Sherubtse College. Activities such as three-legged race, buttoning coat, free hand biscuit eating competition and others were conducted. They also had the participants make an origami with the green colored paper symbolizing cerebral palsy as well as passing on their messages on the white cloth.  The team expressed the difficulties people with cerebral palsy face and stressed the support they need. 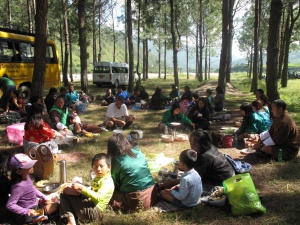 Children of ABS and Changangkha MSS were taken to Puankha for an exposure tour to observe the day. For many, it was their first time out of Thimphu and to Punakha, and the children were very excited to see the new scenarios. Parents were grateful for this journey with their children, to have this opportunity to spend some time with their children out of their homes. The day was collaborated with CBID team Punakha by visiting Chimmi Lhakhang and having a pot luck at Zomlingthang with children with disabilities and their family members.