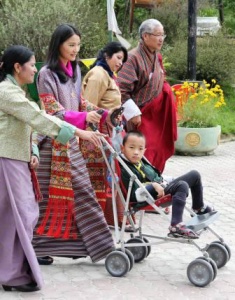 Ability Bhutan Society (ABS) is a public benefit organization founded on the recognition that persons living with moderate to severe diverse abilities, primarily children and their families have special needs. It was registered with the Civil Society Organization Authority of Bhutan (CSOA) under registration no: CSOA/PBO-15 on tenth of November 2011.

The concept of ABS was inspired by the vision of His Majesty Jigme Khesar Namgyel Wangchuck, The King of Bhutan, of a compassionate and just society. It was inaugurated by Her Majesty Gyaltsuen Jetsun Pema Wangchuck, The Royal Patron of ABS, on sixth of April 2012 as a project under the Kidu Foundation established by their Majesties as an endowment for Royal Projects.

Beginning in 2007, families of children living with diverse abilities gathered formally to share their problems of loneliness and helplessness and to explore ways and means to provide better life for their children with moderate to severe diverse abilities, who often have to be left at home alone or at best with an untrained caregiver. This was a very critical situation for the individuals and their families.

It was during that time that the concept of ABS was initially conceived with the objective of helping each other to provide direct early intervention and assistance to their children living with diverse abilities.

The greatest strength of ABS is The Royal Patronage of Her Majesty the Gyaltsuen who takes a deep and active interest in ABS and its activities. Her Majesty is indeed a source of inspiration and aspirations for present and future when in the quality of life of individuals living with moderate to severely diverse abilities would be improved and suffering alleviated.