Ability Bhutan Society (ABS) observed World Autism Awareness Day on 2nd April 2019 with parents, children and teachers of Changangkha Middle Secondary School (CMSS). Around 32 children and parents of ABS as well as CMSS, teachers and ABS staffs participated. The program was conducted in different locations to create awareness to the general public commencing from Changangkha MSS, Buddha Point and to Memorial Chorten at night. 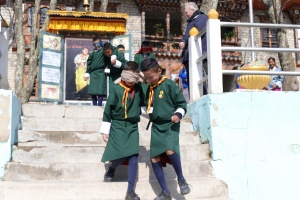 This year with the theme “Assistive Technologies, Active Participation”, it highlights the importance of these technologies such as pencil grip, Velcro, Smartphone, computer and calculator to assist people with autism to actively participate in the community.

The importance of the message that is being delivered and the process of delivery were highlighted. It was stressed that the different types of languages spoken are not essential while communicating. A blindfold activity was also conducted with the students of CMSS to help them understand the challenges people with visual impairment face and their need of assistance. A short skit was performed on the Autism Spectrum Disorder to create awareness of the symptoms of children with autism and what parents and teachers are expected to do. The Principal of CMSS said that the skit was helpful in understanding the need of students with autism.

The activities further continued at Buddha Point where children actively participated in games and interactive activities. A recent research shows that 1 among 68 children come under Autism Spectrum Disorder, globally. In order to create awareness about autism in the community and to educate the public, ABS initiates activities every year outside of the ABS centre during the observance of Autism Awareness Day as well as other internationally observed days on disability.

Rinzin Pem, a grandmother of 5 years old Gizzle Phuntsho, said that she could express her emotions through words after availing the services from ABS, “I have started to notice some improvement in her. She sometimes utters, “ala-la” when she is hurt physically and at times listens when she is told to stay in one place. This for me is a great achievement.” Gizzle is diagnosed with Autism Spectrum Disorder (ASD) and Attention Deficit Hyperactivity Disorder (ADHD) and has been enrolled at ABS since 2018. 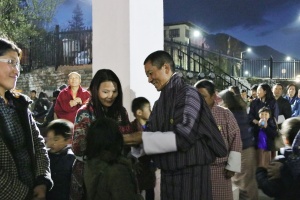 The evening program concluded with the “Light it Up Blue” at the Memorial Chorten. It was graced by His Excellency The Prime Minister, Dr. Lotay Tshering. The Prime Minster offered butter lamp and met with the children and parents of ABS and CMSS, teachers and ABS staffs. “Light it Up Blue” is a global campaign that sees thousands of iconic landmarks, cities and towns around the world turn blue on April 2nd to recognize World Autism Awareness Day.

The Community Based Inclusive Development (CBID) team of ABS in Chukha, Dagana, Punakha, Sarpang and Trashigang also observed the day in different schools extending the awareness on autism. The local leaders, teachers and students joined in the event and helped reach to wider public. 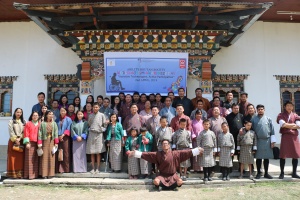 Autism is a condition in which a child with autism may have different or impaired development in social interaction and communication as well as restricted interests. The common barriers they face are communication, recitative behavior and sensory needs such as rocking which are coping mechanisms.  Mrs. Bishnu Maya Gurung, Social Worker and an ABS Clinician said, “we need to give them a structured schedule for the day, give them a quite time if they have ADHD, read them social stories to notify them the things they should and should not do when they go out and teach though Picture Exchange Communication System (PECS). This method can help develop positive behavior to children with autism.”