Observance of International Day of Persons with Disabilities, 3rd December, 2016 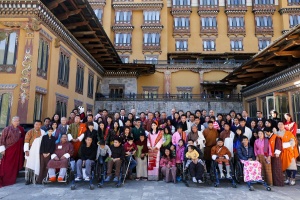 Her Majesty The Gyaltsuen ,Royal Parton of ABS graced the occasion that was held in the capital on the 3rd December which is internationally observed as International Day of Persons with Disabilities.The theme of the day was ‘achieving 17 goals for the future we want’ which drew attention towards fulfilling the United Nation’s adoption of the 17 sustainable development goals in relation to creating a more inclusive and equitable world for persons with disabilities.

Her Majesty The Gyaltsuen launched a DVD created by Wangsel Institute under Drukgyel Central School in Paro. The DVD provides communications support to families and service providers of young hearing-impaired children and contains over 300 signs incorporated with Bhutanese sign language.The chairperson of ABS, Dasho Kunzang Wangdi said “This is a day to celebrate the exquisite abilities of people with disabilities all over the world. It’s purpose is to increase awareness and understanding of disability issues and appreciate the achievements derived from the integration of people with disabilities into every aspect of life to make an inclusive and accessible society. The day gives further importance on redressing the challenges including the stigma and discrimination faced by people living with disabilities every day. While, things are improving, stigma and discrimination still exist. Therefore, a dedicated day is an opportunity for us to pause and take stock of what has been achieved and prepare for what more is needed to be done to ensure inclusivity and equality in our communities.”

Dasho further highlighted the various Disabled Person’s Organisations in the country, which includes ABS, Tarayana Foundation, Disabled Person’s Association of Bhutan (DPAB), Draktsho and Bussi-En. He stressed on the importance of creating public awareness on disabilities and the continued effort of the NGO’s with relevant agencies of the government to foster an inclusive and enabling society. From the pilot study conducted in seven dzongkhags from September 2014 to March 2015,  there are 1,670 people living with disabilities. With 6.3 percent, Punakha has the highest number of people living with disabilities while Trongsa has the least. Of these, 36.9 percent or 617 individuals are single and are within the age group of 21 to 51 years.

From the study, it revealed that the three most common disabilities registered are hearing impairment, the physically challenged and the intellectually challenged. Farmers and students are the majority of people with disabilities. Most were disabled since their births. The study also reported that most of them do not get covered under any support.ABS in collaboration with DPAB, Tarayana Foundation, Draktsho and Bussi-En are carrying out the registration of people living with disabilities in the country, which will be completed by the end of this year.Dasho Kunzang Wangdi said ABS will continue to work on giving access to all public places to individuals living with disabilities. This includes, having at the very least ramps along the roads and footpaths, lifts in buildings, and appropriate washrooms, not as welfare facilities but as their fundamental rights.

“It is a holistic approach to disability-inclusive development, which emphasises the rights of persons with disabilities to equal and accessible health and education, inclusion in socio-economic and political affairs, and access to public places and services. This calls on all the national stakeholders including the local communities for shared responsibility in creating disability-inclusive society and improving the lives of persons with disabilities in the country and world at large,” Lyonpo said.

ABS has been observing the day since 2013 by doing various activities and creating awareness about disability and issues associated to them. The day is marked to promote awareness and mobilise support for critical issues pertaining to the inclusion of persons with disabilities in society and development.

ABS organised the event in collaboration with Ministry of Health.