A person with disability encouraged to work

Lobzang, a fifteen-year-old boy is from Gongtsekha under Jigmechoeling Gewog in Sarpang Dzongkhag. Gongtsekha (Gari Goan) is one of the farthest chiwog under the gewog. Lobzang at his early age got enrolled in a primary school nearby but he could not fulfill his education due to his communication and learning difficulties. Thus, he remained at home with his parents and five other siblings. At the age of nine he started helping his parents with few farming activities and developed some skills. They mostly depend on cardamom cultivation which they get as an annual harvest. 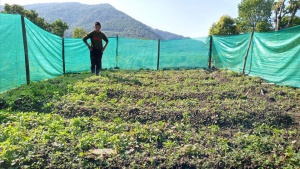 This year, Lobzang with the support from his family, Chiwog Tshogpa and HA, he decided to take farming as his main source of income, growing on a path to being independent. He decided to take this opportunity to earn for his livelihood as well as help his family members. Ability Bhutan Society funded by ABS/BMZ/DAHW project supported with Nu. 10,800 as a seed money under income generation program. They brought chili saplings and fencing materials worth of Nu. 8000. He initially decided to grow chilli and beans to be supplied to school mess. However, due to closure of school due to covid-19 pandemic, the family feared the lost of market and then started growing cardamom.

He wishes to grow varieties of vegetables at larger scale if the school reopens. He also wishes to    extend his farming project along with cardamom and wishes to take farming and vegetable product as his career. However, insufficient cultivation land is a big challenge for his family. Through the recent conversation with his father, ABS team came to know that he is working on his vegetable cultivation with his parents and family is expecting their first chili harvest in next few months.

With little love and support allows persons with disabilities to come out of their shell and earn for their livelihood.